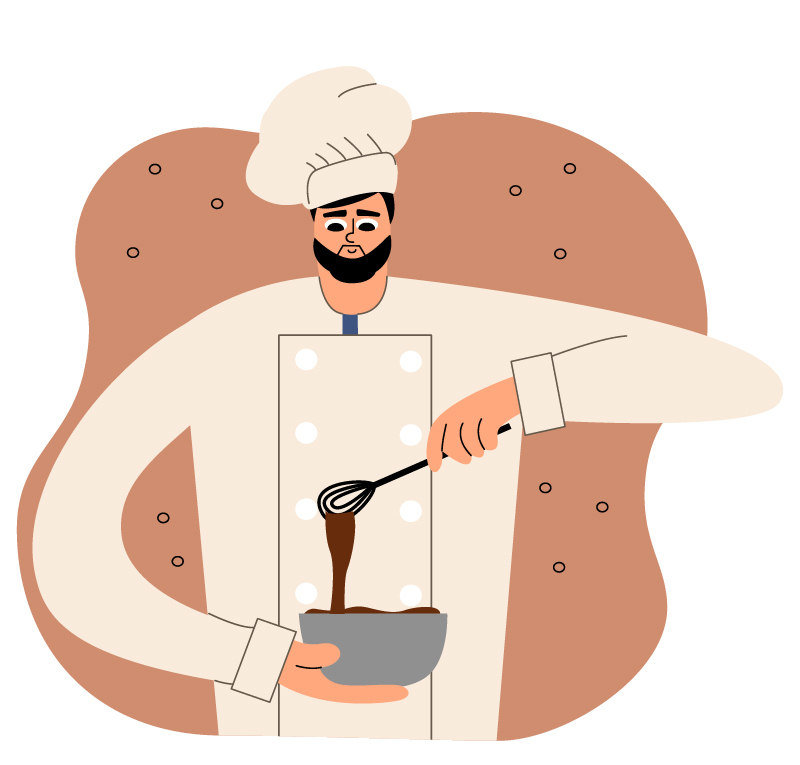 Mr. Xavery was a chocolatier - a maker of chocolate. He wasn't a rich chocolatier (few of them are) but he was a good one, the best in the city. The Great Wave—this was the name of his shop - was forever busy, for the taste of Xavery Chocolate was beyond delicious. It was like a vacation that took only a minute.

He had a daughter named Dochais. A child with hair the very color of chocolate and skin the color of cream. She was lovely. Her duty was to help prepare the chocolate and to stir it as it cooked. She did this in the kitchen, which was in the rear of the shop.

One day Dochais was preparing a small batch of chocolate. She had cooked together the sugar and cream and was just adding cocoa to the pot, when too much fell in—a little too much.

"This chocolate will be too dark to use," said her father. "You will have to dump it out." Then he left her to help someone in the shop.

Dochais was going to throw out the chocolate when she noticed something. It looked like a face. In the chocolate. A dark face that for an instant appeared and then vanished.

"Imagination,” she told herself, emptying the pot.

A day later, as she hurried to prepare a fresh batch, the same thing happened. Too much—this time far too much—cocoa fell in. This chocolate was as dark as coal and not at all useable. If her father saw....

Dochais rushed to the garbage. She was about to discard the chocolate when it came again. The face. The dark face in the chocolate. It lasted longer this time. The lips moved as if it was speaking, but she could hear nothing. The face remained, even as Dochais tipped the mixture, as the chocolate poured out. She trembled as she cleaned the pot.

A month passed. It was now the busy season when those in love buy chocolates for their loves, and those who aren't in love – who are in love with chocolate – buy twice as much. Dochais and her father worked like ants.

It was in her haste and busyness to keep up that Dochais made her greatest error. This time, when she added the cocoa, she was far from careful, and close to the whole thing fell into the pot. She scooped out as much as she could (not a lot), and then stirred the rest in. This was the darkest possible chocolate. It was midnight in a pot. And in the middle of this midnight came the face again.

“Dochais,” it whispered. For now, when the lips moved, there was a sound.

The child said nothing. She was too amazed.

“Dochais,” said the girl's father, stepping into the kitchen. She quickly put the lid on the pot. “Are you finished with that new batch of chocolate?”

“Well, hurry. At this pace, we'll be sold out by noon.” Then he turned, for someone else had come into the shop.

Dochais lifted the lid. The face remained. It turned and turned in the pot. The child thought she would dump the mixture – but no, it was a large one, and there would never be time to prepare a fresh batch. So she added some more sugar and cream – that helped the color a little as well as covered the face – and poured the mixture into the molds to cool. No one would have to know her error.

The Great Wave was so busy that afternoon (for the customers were an even greater wave) that Dochais had to work at the counter, side-by-side with her father, merely to keep up. If her chocolate was too dark, her father was too busy to notice and the people too greedy to care. Some men bought three boxes of chocolate, some women four or more. By the end of the day, the two were exhausted – and the shelves empty.

The next day was Sunday – a day of rest for the chocolatiers. Dochais enjoyed her morning off by strolling through the Green Mansion, the great park of the city. It was a crisp day but not at all uncomfortable.

There was a pretty woman sitting on a bench, a box of Xavery Chocolates on her lap. Dochais watched her open the box and lift a very dark chocolate to her lips.

The child breathed in sharply. Was it? And could it be?