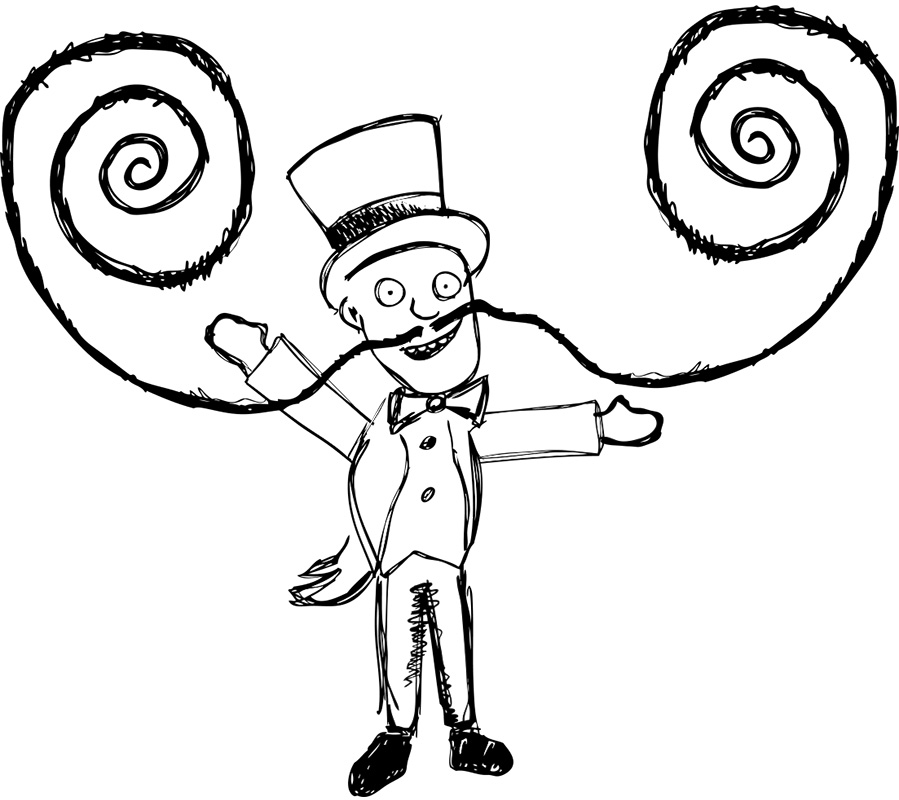 Rudolpho sat silently, slowly stirring his simmering soup. A tiny tear tumbled down his cheek, hesitated for a moment and splashed on his spoon. Rudolpho paid no attention, though. He was too distracted by daydreams of a past life, which had passed him by. Oh, the laughter, cheers, and bursts of excitement he used to enjoy back then...when he was a circus performer. In those days he had been so fantastic! Juggling, singing, dancing, joking, tumbling, magic-tricking; he’d done it all. He’d shown such flair! Such showmanship! And he’d worn such a marvelous mustache! Yes, of course a well-manicured mustache has always been the trademark of any successful circus performer. And Rudolpho’s had been the best one ever.

But unfortunately, those delightful days had deserted him. As had his mustache. He’d shaved it off the day the circus left him. Now, without the roar of a crowd to ignite his spirits, he was merely a sad, fifty-year-old man with not a bit of hair on his face. Or was he sixty? Seventy, perhaps? Rudolpho could not be bothered to remember his years. But he could recall how he’d lost his one and only true love--the circus.

You see, the newer and increasingly impatient audiences had grown tired of his traditional talents. His classy characteristics. They wanted danger... yearned for excitement... ached for technology! All sorts of fresh, sparkly, flashy, modern performers had come along, and they’d pushed Rudolpho further and further behind. Until he was forgotten, left all alone, here in Clutterberg, sobbing in his soup.

Worst of all was his new factory job. He spent all day making those little plastic tips for the ends of shoelaces. There was no flair in it whatsoever! No showmanship. No need for a mustache. In fact, it was the most un-circus-like thing he’d ever experienced. Rudolpho needed something magical or mysterious or miraculous to happen very soon. Otherwise, he knew he would become so bored, he’d simply fall to pieces and scatter away on the breeze like a spilled sack of empty peanut shells.

Suddenly, his daydreams were cut short by a tremendous noise from his backyard.

He peered through his kitchen window and what he saw...well...he could scarcely trust his own eyeballs! He blinked them, he rubbed them, he narrowed them, he opened them wide, and still, they showed him the same spectacular sight. Was it a cat? Was it an elephant? No, it couldn’t be! Yes, it could! It was both! It was...a CatElephant!

Rudolpho studied the features of the fantastic figure. It was roughly the size of a small horse, and it had black, orange, and yellow stripes crisscrossing its white furry body. Its long black trunk snuffled around on the ground, finding bits of leaves and grass to stuff into its small mouth.  Positioned on the tip of the trunk was a perfectly pink nose with long, stiff, white whiskers twitching on either side. Two wide, flat ears sat on the top of the beast’s big, round head. The ears rose to points like a cat’s and flopped over like an elephant’s. Its long, banded, hairy tail swished back and forth. Two gorgeous green eyes glowed in the dim early evening light. The creature’s thick, round body sat like a barrel on four tree trunk sized legs, which ended in wonderfully white paws.

No doubt about it, this was the magical, mysterious CatElephant that Rudolpho had heard so many stories about. Late at night, around those old circus campfires, someone had always told tall tales about seeing one of these fantastic feline pachyderms. Rudolpho never believed the legends...until now!

The creature smoothly leaped from the ground to the top of the backyard fence. Without a doubt, it had the beauty, balance, and grace of a cat. Its amazingly alert gaze darted around as it softly stepped along the tips of the narrow boards. Searching for another snack, perhaps? Some more grass and leaves? A bird?  Maybe a mouse?

“Spec-TACULAR!” Rudolpho couldn’t keep himself from shouting out loud.

The startled CatElephant turned to face him. Its striped back arched to the sky as its trunk once again blared out an obnoxious noise.

Rudolpho’s ears ached at the awful sound. Had he scared it? Would it run away? Desperate to befriend the CatElephant, Rudolpho leaped out his kitchen window (no time for doors) and crashed to the ground in a heap. Luckily, he landed on some big brown paper bags full of his lawn clippings. He saw the CatElephant look longingly at the long, luscious, fresh-cut grass that had spilled out, then its gaze darted back to meet his own. Its trunk raised, ready to unleash another meow-bleat.

However, before the sound blasted out, the fence on which the heavy creature stood splintered into thousands of pieces! The great beast crashed to the ground with a tremendous KER-THUMP! And after, all was silent.

Fearing the worst, Rudolpho grabbed an armful of the cut grass and inched forward to investigate. As the dust cleared, he saw the CatElephant sitting quietly amongst the broken boards, licking its front paw. Naturally, it had landed on its feet, as cats always do. When it spotted Rudolpho’s approach, the creature again stared at the lawn clippings in his arms with round, hungry eyes. Then a new noise arose, breaking the silence. Was it a motorcycle thundering down the street? Or a powerful speed boat zipping across a nearby lake? No, this sound came from deep within the CatElephant. It was purring! And oh, what a teeth-jangling, spine-tingling, hair-raising hum it was!