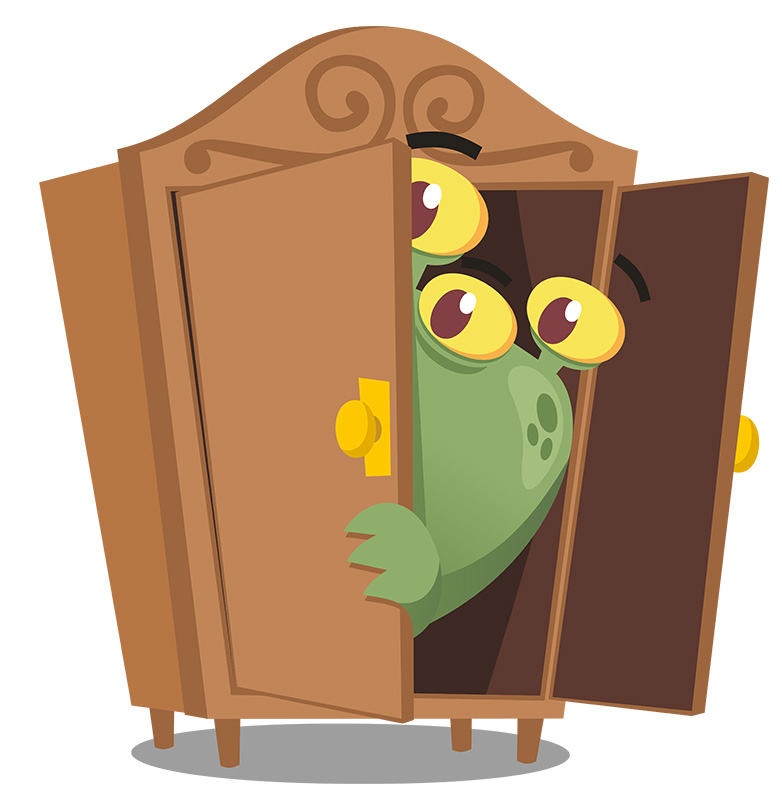 His older sister looked up from her messy desk. “I can’t. Mom told me I have to clean up my room before I go anywhere.”

“But you’ve gotta come. There’s something in my closet.”

Liz rolled her brown eyes. “There’s something in everybody’s closet.”

“Yeah, but my something’s alive. It’s making scary noises behind the door.”

“It’s probably just Roddy. He’s always going in my closet and getting locked in.”

“But it’s not Roddy. Roddy’s right here.” Miguel pointed at the floppy-eared spaniel.

“No, I’m not,” Miguel said. “There’s something in my closet, and it’s scary, scary SCARY!”

Liz sighed. “If I come and look will you leave me alone?”

Miguel nodded his head. He grabbed Liz’s hand and pulled her down the hall.

Liz looked around as they entered Miguel’s room. “How do you keep your room so neat?”

“Easy. I—” Miguel’s eyes widened. “Listen,” he whispered. He pointed toward the shut closet door.

“I don’t hear anything,” Liz said after several seconds.

“You will. Move closer to the door.”

Liz took one step then two toward the closet. “I still don’t hear any—”

“Woof!” barked Roddy. He sniffed at the door.

“It’s a monster,” Miguel said in a hushed voice. “A hairy scary giant monster with giant claws and giant teeth. And I bet it wants to eat us up.”

Liz scowled and crossed her arms. “Because.”

“I bet you it’s the hairiest, scariest monster in the whole wide world.”

“No it’s not,” Liz said, backing away another step. “There’s no such thing as a hairy scary monster.”

And they heard it again.

Miguel scooped Roddy up and held him close. “It’s a giant monster bug with fangs,” he said. “And it has a bald head, hairy arms and legs, giant claws and—”

“I’m going to tell Mom,” said Miguel. “Then she can call the police and the firemen and the army and the navy and the air force and the—”

“I’m opening the closet door,” Liz said. She took two big steps forward and then two more. She reached for the doorknob.

“No!” Miguel buried his face into Roddy’s fur. Roddy buried his head into Miguel’s shirt. Then both of them unburied their faces and peeked as Liz touched the closet’s doorknob.

“So that’s why your room is so neat,” she said at last. “You stuffed it all in your closet.” She shook her head. “Mom just might call the firemen, police, and army if you don’t clean up this mess.”

“But what about my monster?” Miguel asked.

“There isn’t any monster. Just a monster mess. In fact— EEEEEEK!” Liz cried.

“CRUNCH, MUNCH, SQUEAK, GULP!” gurgled a big eyed, bald-headed, round-faced creature staring out of the closet at them. The creature stuffed a small rubber ball into its mouth and said, “Crunch, munch, squeak, gulp.” Then, it wiped a hairy hand and a hairy leg across its lips and burped.