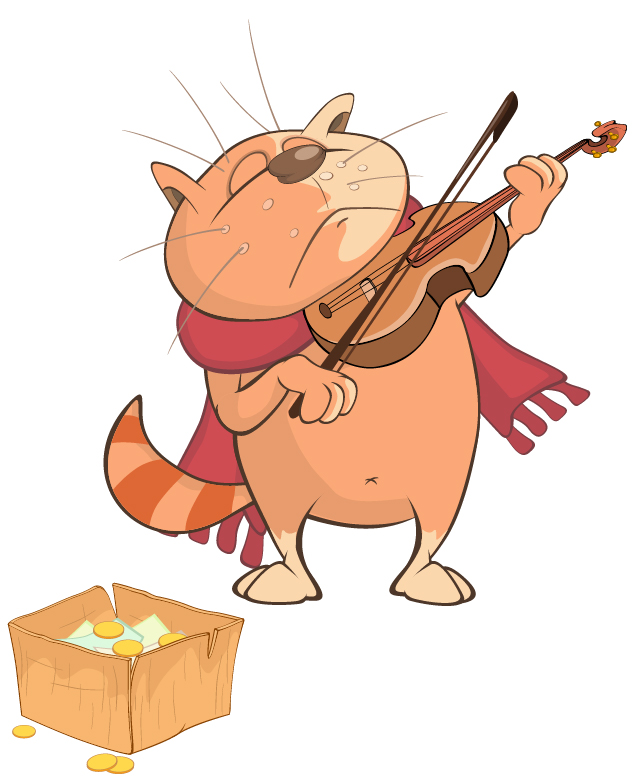 Hey diddle diddle,
The Cat and the fiddle....

A cat really can play the fiddle. Only it has to be a cat fiddle. And a cat fiddle can only be made by an Old Cat Master.

Every so often, a cat's whisker will simply fall out. To an ordinary cat, this is nothing. He'll go straight back to napping or batting at a ball of fluff. But to an Old Cat Master, ah, it's a special moment. He'll scoop up the dropped whisker and whisk it to one of his secret hiding spots (you see, it isn't just leopards that have spots).

And while the crafty cat waits for the next whisker to fall out, he isn't lazy. He might seem lazy and sleep half the day, waking up only to scratch at a tree trunk. But sleeping and scratching are critical things to an Old Cat Master. For when he's scratching at a tree, he's chipping off bits of wood, which he'll hide in another hiding spot. And when he's sleeping, he's dreaming of the splendid fiddle he'll make, at last, when his hiding spots are jam-packed with whiskers and wood.

When that glorious time finally comes, he'll lick the wooden bits all over (cat spit is as good as any glue on earth), and fit them together until the body of the fiddle is finished and done. Then he'll retrieve the whiskers from their hiding place. Those become the strings of the fiddle and the bow.

Now comes that moment, that moment of wonder, that all Old Cat Masters live for. That sparkling moment when he lifts the fiddle, swivels the bow, and strikes the very first note. If the sound makes his fur stand on end, well, he tightens the strings and tries again. But if the sound makes him meow without meaning to, well, then, he purrs (and means every word of it).

There are Old Cat Masters all over the world, but the greatest of these is Cativarius. He only scratches at certain trees and eats a species of bird that makes his whiskers sing. I can't tell you which trees or what species, because I don't know. Only Cativarius knows. Of all the Great Cat Secrets, that is the greatest. And of all the legends about Cativarius, the best and best known is this.

When he was only a very young cat, Cativarius had a nemesis--an enemy. This was Bartolomeow, a black puss with cream-colored paws. Each hoped to one day become an Old Cat Master, and to that end practiced his fiddle-making every day. And though they were both very talented cats, you never saw two felines who were less alike. For Bartolomeow, oh, he was a swaggerpuss, and a hollerpuss, and as proud as a dog. He thought his fiddles were the best in existence and let everyone know about it.

“Hey, Cativarius!” he cried one morning, skipping along, a fiddle in his paws. “Silly kitten! Give up! You might one day make an okay instrument, but it will never, never sound as good as this.”

Pouncing onto a trash can, he played a bit of “Hickory Dickory,” and truly, it did sound very good.

Then he blew a kiss to all the girl-kittens--there were always plenty of those whenever Bartolomeow was around--and skipped back down the alley.

“What a nincompuss!” said a cat to Cativarius. “Your fiddles are at least as good as his. You should brag about them, too.”

“My fiddles are good,” answered Cativarius. “And I could spend half the day bragging about them. But I'd rather spend all day working on them and improving them, with room, of course, for a nap or two.”

His friend thought that sounded reasonable, especially the nap part.

The following afternoon as Cativarius sat diligently licking bits of wood and sticking them together, Bartolomeow again skipped up to him.

“Still at it?” He laughed. “You know what they say: all work and no play. And speaking of play, Cativarius, feast your ears on this!”

Bouncing onto a fencepost, the bratty cat lifted his fiddle, playing a pinch of “Old King Cole,” and truly, it did sound very, very good. Then he took a bow and skipped down the alley, a dozen girl-kittens tripping along behind him.

“What a kittwit!” said a cat to Cativarius. “If I were you, I’d chase him out of town!”

“I could chase him,” said Cativarius, tossing aside a bit of wood that wasn’t just right. “But I’d rather spend that time making fiddles. For my dream, Gingerly,” (that was his friend’s name), “is to make the greatest fiddle ever made. I may not succeed. But one cannot succeed,without at least trying.”

Gingerly thought that sounded very wise and would have written it down, but she didn’t have a pencil.

Evening is a magical time for cats. Beneath the yellow moon, the whole feline world comes alive. In the daytime, the alley where Cativarius lived was a quiet place (except, of course, for when Bartolomeow showed up). But at night, ah, it changed. It filled up with cats like a bathtub filling. And all of them, all night, every night, chatted and sang, and fought with dogs (well, cats will be cats). It was wild.

One especially wild night when the moon was round and full, Bartolomeow wound his way through the crowd toward his nemesis.

“I have finished for the day,” said Cativarius.

“And that’s your latest?” Bartolomeow pointed to the finished fiddle at Cativarius’ side.