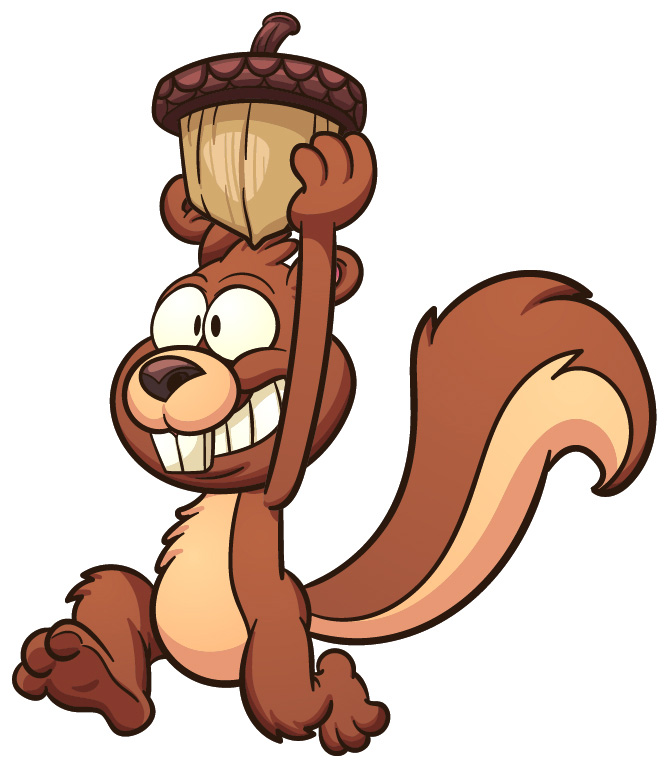 In the early spring, while the evenings were still cool, a young squirrel stuck his head out of the nest, high up in a mighty oak. His name was Buddy. Up until today, Buddy had stayed nestled inside where it was warm and dark. Rain couldn’t touch him in there, and he was safe from the wind. Still, Buddy knew it would soon be time to leave the nest.

“But I don’t wanna leave the nest,” he told his mother early one morning. “Why do I have to go?”

“Because,” she told him in her soft voice, “it’s the way of a squirrel to go into the world and find something to eat.”

His mother only shook her head. “One day you’ll want your own nest. And you have a great purpose in the forest. You’ll see.”

“This is very important,” she began, “you’ll be looking for nuts, acorns, fruit, and seeds.”

“They aren’t bad, you’ll see. Now follow me.” She took them into a nearby farmer’s field where the young squirrels found more corn on the ground than they could possibly eat. Their mother showed them how to gather kernels of corn, acorns, and nuts, and bury them in the ground for later. Buddy learned how food could be waiting for him just under the next leaf.

Mother squirrel sat with her children near several tall ferns. “This is the most important lesson of all,” she said. “If you’re ever in danger, a squirrel simply turns, runs to the nearest tree, and climbs as fast as he can. You’ll be safe up there.”

Buddy shook his head. “Not me,” he said as his little chest puffed out. He clenched his two front paws and punched into the wind. “I can take care of myself.”

With a stern look, his mother said, “You must do as I say.”

The young squirrels went back to searching for food until, late in the afternoon, Buddy looked around.

“Hey,” he said to the others, “Where’s Mom?” They only shook their heads. He looked up where an eagle soared in the sky. Wish I could fly like that, he thought. Hope he didn’t catch my mom. Right then Buddy decided to try flying. He grabbed two dead leaves off the ground and climbed up the nearest tree. About four branches up, he stopped climbing and scurried out onto the limb.

“I’m gonna fly,” Buddy called out to the other squirrels. They looked up and laughed.

“Squirrels can’t fly,” one of them said.

Buddy winked. “What about flying squirrels?”

“You’re not a flying squirrel,” another answered with a giggle.

“Oh yeah? Watch me.” With that, Buddy began flapping the leaf in each paw. When he’d gotten them going as fast as he could, he stepped off the branch. But no matter how hard he tried, there was no way Buddy was going to fly. He fell to the ground like a ripe walnut.

“Look!” a squirrel on the ground said with a laugh. “Another nut falls from a tree.”

Buddy got up off the ground, brushed his fur, and grumbled, “Those dumb leaves probably weren’t big enough.” Then he walked away while the other squirrels kept laughing.

When he reached the stream, Buddy looked down just as two big fish swam by.

Wish I could swim under water, he thought. He moved right up to the edge of the bank so he could get a closer look. That’s when something terrible happened. The dirt under his feet broke away, dumping Buddy into the cold water. His head went under, and he found out very quickly squirrels weren’t meant to breathe under water. He came up coughing, sputtering, and gasping for breath. In the distance he saw a beaver making repairs to the beaver dam. “Not even gonna try that,” he said with a sigh.

After he’d sat in the sun to dry, Buddy watched as a bunny hoped past him. I could do that, he thought. Soon he stood up on his two hind feet and jumped as hard as he could, but he didn’t go as far, and he didn’t go as fast.

Still, it didn’t stop Buddy. Like the bunny, he began to hop, hop, hop along the trail. That’s when another rabbit stopped and asked him, “What are you doing?”

At first the bunny didn’t do anything. Then he began laughing...