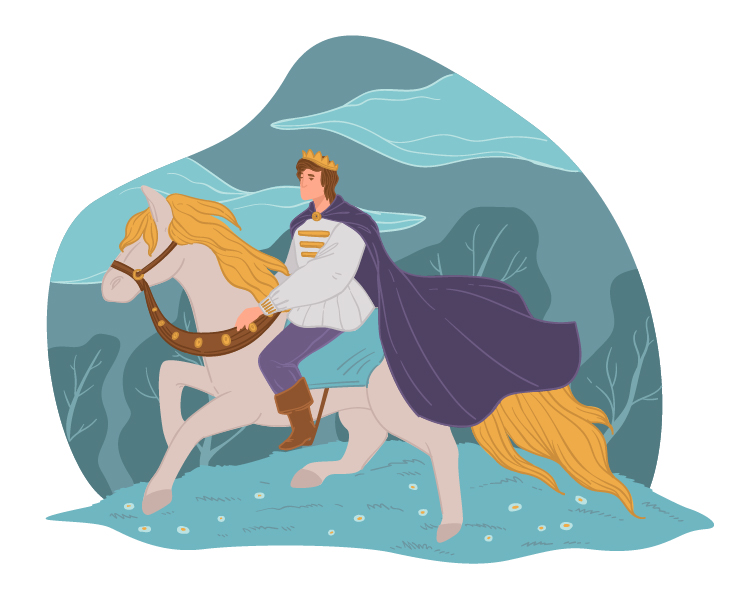 “Mom, could you tie this, please?” Ben asked for the sixth time.

“Sure honey.” She tied the tattered blanket loosely over Ben’s shoulders and then ruffled his hair.

“Thanks, Mom!” Ben skipped out the back door with his cape flying behind him.

Sir Ben the Bold, on his proud white stallion, Storm, gallops to the edge of a large grass field. Across the field the Black Knight awaits on his dark horse. Storm stomps the ground, eager to start the jousting match.

Both knights raise their lances. Storm springs forward, charging toward the Black Knight. The pounding hooves shake the ground. The knights thunder toward each other.

With a great clash of lances, Sir Ben nearly falls off his horse. He pulls himself back into the saddle and then glares back at the Black Knight. “You’ll pay for that.”

The knights swing their horses around as they reach opposite ends of the field, ready for a second pass. Sir Ben spurs Storm into the next charge. Again, the knights race toward each other with their lances held steady. They draw closer; the horses run faster.

A thunderous crack sounds as the lances collide and snap in half. A jagged edge pulls the Black Knight from his dark steed. Ben the Bold skids Storm to a halt over the fallen knight.

The Black Night scowls up at Sir Ben and yells, “NEVER!” Grabbing his own broken lance, he springs to his feet and lunges toward Ben the Bold.

Sir Ben spurs Storm into action. The Black Knight’s lance snags the good knight’s cape, pulling it from his shoulders.

Ben blinked and looked down at his blanket pooled on the ground. He grabbed it and ran back into the house. “Mom, can you tie this on me?”

She turned, arched an eyebrow, and stared at Ben.

Back outside, a cold, wet nose nudged Ben’s hand.

Ben, the great and powerful wizard turns to face the sleek, black dragon. With a swish of its powerful tail, the dragon barks out a blast of fire.

Ben the Great swings his staff and wards off the flames.

The dragon rears up, its long claws glint in the sunlight.

A stream erupts from the end of his staff and drenches the dragon, extinguishing his flame.

A powerful paw swipes at Ben the Great. The wizard dodges the attack, but the dragon’s claw snags the cape from his shoulders.

Ben grabbed the blanket, patted his dog on the head and ran back into the house.

“Mom, Rufus pulled this off me!”

“Thanks, Mom.” Ben dashed away.

He stopped just outside the door and looked around trying to remember what he was playing. Tall grass swaying in a gentle breeze drew his attention.

The villainous Thinman jumps onto Super Ben’s hoverboard and speeds off.

“Stop right there, you criminal!” Super Ben calls after the tall, green villain...